Aerial view from the east 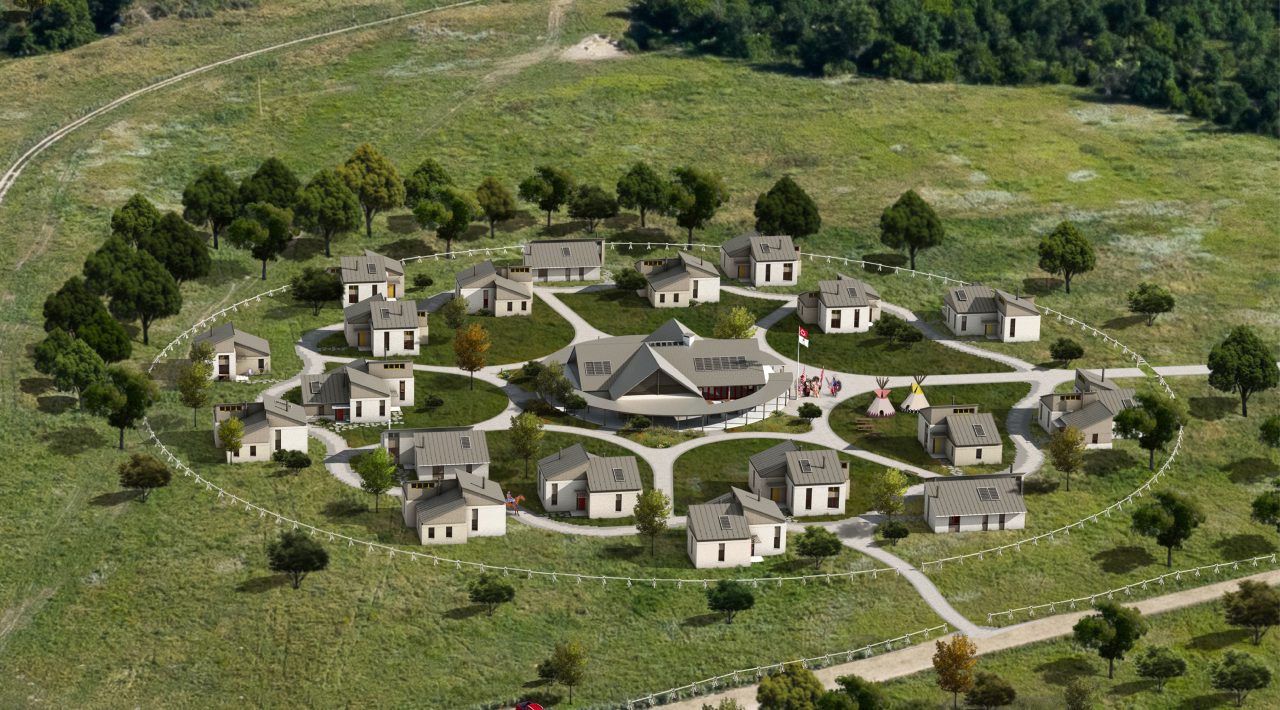 This project is ongoing. Please check back for updates.

The Wiconi Community is a sustainable, multigenerational affordable housing cooperative envisioned by elder Henry Red Cloud as a prototype for the Oglala Lakota, a Native American tribe living on the Pine Ridge Indian Reservation in rural South Dakota, one of the poorest communities in the United States. On the rolling, mixed grass prairie of the Great Plains, the Wiconi Community—meaning “life” or “circle of life” in the Lakota language—is rooted in Native American heritage and reflects indigenous values. Footpaths divide the tiospaye (clan) into seven wicoti (camps), a sacred number for the Lakota, that contain individual houses for tiwahe (families) and attached one-bedroom apartments for elderly extended family with a central lodge for communal living and dining. All buildings will be zero-energy, powered by locally made solar panels and constructed by unskilled tribal labor using compressed earth blocks from local soils. When complete, around 75 inhabitants of all ages will call the Community home. On-site food production and a dedicated marketplace for small-scale commerce will further empower Lakota cultural restoration and community resilience.

Kinship is foundational to the Lakota, but the suburban tract-housing and government-issued, mass manufactured mobile homes that are common on the “Rez” challenge multigenerational cohabitation. The Lakota refer to their extended family as tiospaye, from ti or tipi (a dwelling) and ospaye (a subgroup of people), which is expressed in a traditional settlement pattern: a ring of tipis around a communal fire. The Wiconi master plan revives this ancestral, culturally appropriate design. Each home is conceived as a cluster of volumes, whose modularity simplifies construction and promotes adaptability and expansion for intergenerational coliving.

The non-profit organization Red Cloud Renewable—founded by Henry Red Cloud, self-described “solar warrior” and direct descendant of famed Lakota leader Chief Red Cloud (1822-1909)—trains tribe members in solar panel manufacture and installation, reforestation, the cultivation of native vegetables, and sustainable building techniques. Using the portable block machine provided by non-profit partner EarthInBlocks, local laborers will train in the manufacture of compressed earth blocks (CEBs) while employed in the construction of the Wiconi buildings. The average construction cost of each home is equivalent to subsidized government housing on the Rez, but with the benefits of local capacity-building, the utilization of available resources, and contribution to the tribal economy.

The average winter heating bill in homes on the Reservation is an astronomical $300 to $500 USD per month due to poorly insulated construction and the cost of propane. The Wiconi structures, in contrast, are designed to perform as passive solar buildings with carefully oriented apertures and internally exposed thermal mass (CEB walls and concrete slab) to harvest the heat from solar gain and reduce the need for mechanical heating. The Community will be powered by renewable energy collected via a central 60 kW solar array installed on the roof of the market/parking canopies, plus individual solar air furnaces and solar hot water heaters atop each building. All photovoltaic systems will be assembled on site by Red Cloud Renewable, building on the organization’s Lakota training initiatives.